When Hong Kong’s basic freedoms come under attack, media tycoon Jimmy Lai finds himself in the crosshairs of the state and must choose between defending Hong Kong’s long-standing liberties, or his own freedom.

Jimmy Lai personifies Hong Kong’s entrepreneurial spirit. This spirit, coupled with an embrace of freedom, unleashed economic prosperity for Hong Kongers and made Jimmy a billionaire. Jimmy’s native China underwent a similar prosperity by undertaking an experiment with personal and economic freedoms, lifting an astounding 800 million Chinese out of poverty. Today, it’s a different story—and the stakes couldn’t be higher for Jimmy Lai, the citizens of Hong Kong, and the people of China.

Jimmy fled Maoist revolutionaries as a 12 year old and began a new life as a simple textile laborer in Hong Kong. Within 30 years he started a fashion house and built Giordano into an enormously successful clothing retail business with thousands of stores worldwide. In reaction to China’s 1989 Tiananmen Square massacre, Jimmy launched Next Media and published Hong Kong’s most successful newspaper, Apple Daily. As guardian of freedom of speech and the press, Apple Daily provided an independent voice for Hong Kong following its 1997 transition from British rule to Chinese control.

Reassured by Beijing’s “one nation, two systems” approach, much of Hong Kong’s prosperity and freedom continued—until a palpable shift occurred under the leadership of Chinese president Xi Jinping. As China retreated from its “one nation, two systems” policy and began installing pro-Beijing leaders in Hong Kong, Jimmy became a leading voice against repressive policies. Jimmy could have fled but he chose to stay, marching alongside millions of his fellow Hong Kongers in defense of freedom and democracy. He was soon arrested and jailed. International banks froze his assets. Apple Daily was raided and key executives arrested. In June 2021, Apple Daily printed its final edition and shut its doors.

Today Jimmy perseveres in a Hong Kong prison cell awaiting trial. Featuring Lord Christopher Patten, Rev. Robert Sirico, Mary Kissel, Victoria Hui, Joey Siu, William McGurn, Lord David Alton and others, The Hong Konger chronicles Jimmy’s story of heroic sacrifice and symbol of the freedom movement. From his own testimony as well as through exclusive interviews with diplomats, citizen activists, scholars, and friends from across the globe, one thing becomes clear: Jimmy’s fate is in our hands. His cause must not die in a prison cell—for freedom is not merely his cause, but the cause of all Hong Kongers, the Chinese people, and indeed all humanity.

Co-hosted by the Free Enterprise Center and the Honors Program An Engaged Community: The Eight Habits of the Heart 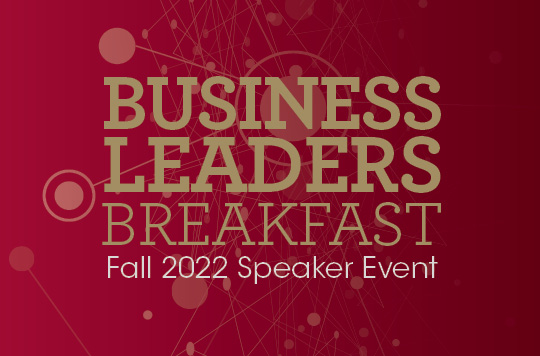 CUC's Free Enterprise Center is presenting the College's Business Leaders Breakfast. The series will host Pulitzer Prize-nominated author, Clifton Taulbert, whose talk "An Entrepreneurial Mindset" will discuss the key to innovation and workplace success and not allowing past successes to block future successes.